Did you see it? HIVE has pumped, and it seems to be consolidating today at a much higher price, we will see what happens over the next week. But if you didn't notice, HBD seemed to pump as well, up to around $1.10. Exciting times - and a huge opportunity for the ECOBANK.

This gives me a good opportunity to talk about how I am managing the stables on the fund - we have started taking some of them out and converting into pesos, making a large payment on the 'Casa Lago' Property, but we have started with the native BUSD on the BSC chain. Much of our HBD is sitting in the savings account, and last night during the pump I got excited and withdrew 4000, which will take 3 days to show up again.

Plus we still have more than 3800 HBD in there, and the 7800+ has earned up over 100 additional HBDs which will be available to claim in just over 1 more day.

With the fall in HIVE price, and the rewarded BXT being priced in HIVE, the APR dropped, it was low, down to 12 or 13%. And lots of people pulled out because of that, keeping it higher than it could have been. @ecobanker had about 3700 stables in there, if I can recall correctly.

Why did I keep it there for an inferior ROI? There are 3 reasons: 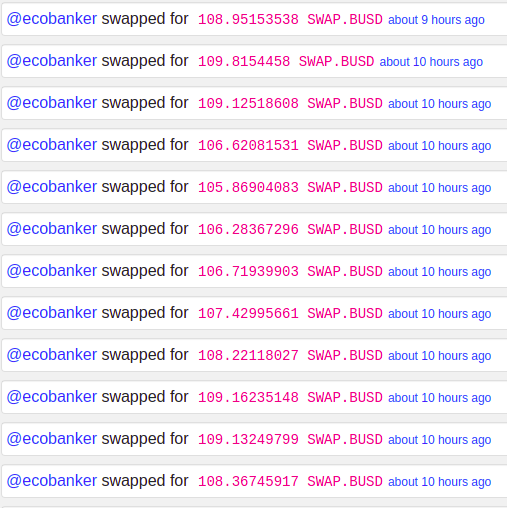 What you are looking at here are 100 SWAP.HBD swaps into SWAP.BUSD. As a prewarning I might not say SWAP.HBD and SWAP.BUSD everytime, but you may be aware these are the claim-ticket variety tokens that hive-engine manages.

While somethings about hive-engine are centralized, the team works very hard, and has opened up the side chain to increasing decentralization, there are 'witnesses' (block doctors?) and the group is really active in solving problems which inevitably come up. Together with @bala41288, we run the @locolombia hive-engine witness, currently ranked number 10.

While @locolombia and @ecobanker are not the same, ECOBANK is a project fully formed in Colombia, so we have some regional power base being formed here - at least in terms of branding.

Back to the arb.

The cool thing about stable pools is when they get out of whack. This is only true if you actually trust each of the two tokens that are the two sides of the pool you use. If the stable is heading to zero this is not good at all. But if the stables are good, the so-called 'impermanent loss' is actually a gain. That's right, you get MORE stables when they unbalance.

When I noticed the pool was out of whack by ~10%, I pulled our liquidity, immediately making a profit if the stables are valued at par. Here are the numbers for that: 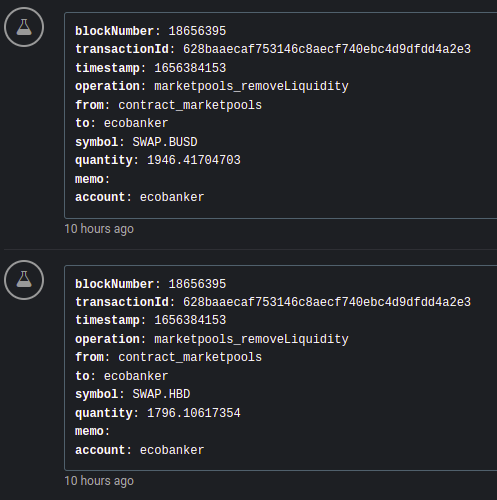 I pulled about more than 3742 stables, already a 1% boost over the 3700 I had in there. And from here I began swapping. We had about 20 busd and another 100 HBD on hand that I had been waiting for the right opportunity to swap. So let's do some math:

The total profits of 192 stables over the 3820 in par value that I actually had (expected) yields an estimable 5% return for the evening's work, not bad for staying vigilant!

But that's not the end of the story. Sure we are sitting on a pile of Swap.BUSD, and we need to cash it out into Colombian Pesos to pay off the rest of the bill on Casa Lago. We owe the owner directly and not a bank, and he isn't yet charging us interest, so I would actually like to see if we can earn any more yield in the meantime.

One option is to wait for the 4000 HBD we withdrew from savings to come out, convert it to SWAP.HBD and match it with SWAP.BUSD in the pool. This is nice because again, when we need the money we need it in BUSD and the closer we can get it to there in the meantime, the less fees we will be paying at the end when we are trying to get it out. Since there are fees all over the place in this world, it is my great hope that our management profits can be superior to any fees we will pay, its a noble goal at least.

Another option is the reverse arb. HBD often trades at a discount to BUSD on hive-engine. Over time it goes both ways, the pool is not that big so someone like me just has to stay vigilant, checking the swap price every time I am online, and swapping one way or another depending on the opportunities of the day. We could swap 2000 BUSD back into HBD at some sort of (stable-par) profit, picking up HBD for maybe 98 cents.

This morning I checked the price, and while its still not at a discount, the premium has cooled, I am really happy I stayed up a bit longer last night to get this done and make 5-9 dollars per 100 converting HBD to BUSD. It might take another day or two, or even next week, but I am sure the opportunity will arise again to make 2 or more dollars per 100 swapping back the other way. And since @ecobanker withdrew its 12+% of the pool, and HIVE price pumped, the USD value of BXT pumped with it, and both things have resulted in the SWAP.HBD:SWAP.BUSD pool reporting a much higher APR:

Don't forget that in addition to the headline APR, currently showing 16.653% per year, the swap fees from people using (and arbing) with the pool go to the Liquidity Providers. I have had the legendary arbitrageur toni montana show me the results before, its something that changes every day and based on volume moving through the pools. The last update I got, the end of March this year, here were the results: So there has been an additional, 'hidden', ~2.57% apr from fees in the HBD:BUSD pool as well. Every bip counts when you are doing something so modern as farming stable coin yields.

Now, there are risks in this. Since I trust HBD quite a bit, and love its volatility for this (read this very post again if you don't understand that), the biggest risk to me is the BUSD. So far binance has been 'the adult in the room', but they are a goliath in this space, and there is a non-zero risk they will err and/or collapse and/or break in some way, affecting their stable coin or trust in it.

Remember that in crypto, there are also non-zero risks of fat-finger mistakes. "User error", as in "the problem is somewhere between the chair and the keyboard". As funny as that is, its also terrifying. One of the biggest risks is ME!

The final risk I want to talk about is a timing risk. Since money can be made precisely when things unbalance, money can also be lost during those periods as well. If a person has a certain 'timing' that needs to happen, I must pay my rent or pay off this debt at 11pm June 32nd, for example, then you are taking a big risk everything won't be exactly lined up for how you need it during that exact moment in time, meaning you are going to be paying through the nose to do what you want to do, instead of doing it profitably like we hoped. Always plan way ahead for 'timing'. And I mean a year ahead if possible.

That's my update today on my weird and wonderful crypto strategies! I hope you learned something, feel free to praise me below in the comments. I'm sure I didn't say everything that could be said, feel free to lash out at me below if that's what you would like to do.

Vote for this article

You did great with that 100 HBD to BUSD trades! I was poking around with HIVE, but didn't do that well! Congrats!

This post has been manually curated by @bhattg from Indiaunited community. Join us on our Discord Server.

Do you know that you can earn a passive income by delegating to @indiaunited. We share 100 % of the curation rewards with the delegators.

Read our latest announcement post to get more information.

Please contribute to the community by upvoting this comment and posts made by @indiaunited.

that's a cool $60 some bucks in interest each month now 💪

Interesting, I've never known anyone growing charcoal before, I might have to research that. I raise sheep, that's my sustainable crutch.

Is always great to be prepared and be ready for such an opportunity of the current pump.

I am wondering if it's a good idea to take advantage of things over at BUSD when there are fees involved in both directions. Then again, the fee looks to be the same if you want to use PolyCUB instead.

Join us in Discord!

Congratulations @ecoinstant! You have completed the following achievement on the Hive blockchain and have been rewarded with new badge(s):

You can view your badges on your board and compare yourself to others in the Ranking If you no longer want to receive notifications, reply to this comment with the word STOP